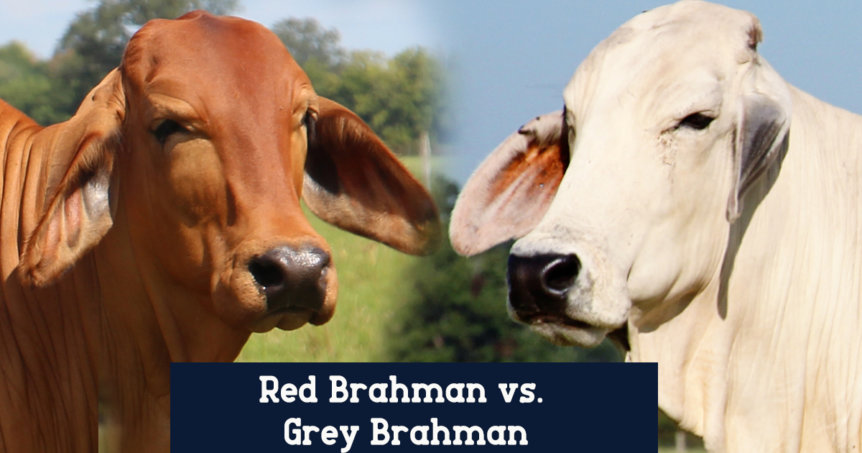 Angus are black.
Herefords are red and white.
Shorthorns are red, white and roan.
Charolais are white.

The hide color of the American Brahman is one that has a lot of variation, and if you are new in the breed, it can take a little time to understand the differences. In this blog, we’ll share some of the basic differences.

While all American Brahmans are registered under one herd book, the breed is divided into two official color classifications: Grey Brahman and Red Brahman.

At the time of registration, the breeder must designate the hide color of the calf.

As with any objective classification, most of the color classifications are done based on visual appraisal of the calf. But, it gets a little tricky.

Some Grey Brahmans are actually born red, but turn grey. So, if you have a grey pedigreed animal that’s born totally red, don’t panic. From birth to weaning, the calf’s hair coat will likely gradually start changing from red to grey over time.

Grey Brahman cattle display more of the characteristics typically of the Guzerat ancestors that were one of the four breeds that formed the American Brahman as we know it today. A lot of this is due to the heavy influence of J.D. Hudgins bloodlines, which also carried a more traditional Guzerat type in the early 1900s and early development of the breed. Manso, the foundation sire of the breed, was a grey Brahman bull and his influence helped shape the foundation of the breed.  Many of the original Brazilian import bulls that JD Hudgins imported in the early 1920s were also solid grey bulls.

Within the grey classification, you can still have some variation in color. These include:

The Red Brahman breed is one that emerged about 20 years after the formation of the ABBA in the 1920s, and was heavily influenced by the Mexican importations. Some of the traditional red cattle descend from the Gyr breed which was also one of the four foundations of the American Brahman. Traditional red cattle from those early days of the breed had more of a roll to their head and sometimes may have longer ears.

Within the red classification, the hair color is primarily a reddish tint color, almost an organe-ish color, but again can have variation in color.

Here at BRC, we have a handful of red cattle, but we are big fans of the red breed. Here are a few red breeders we recommend:

The good news is, no matter the color, a Brahman is a Brahman. And, the unique color patterns is what makes each unique. Some breeders like a solid grey herd, others like a lot of color. There is no right or wrong, it’s totally an individual breeder preference.

If you’d like to learn more about Brahmans, we invite you to read the book American Brahman, or join the Brahman Academy, our online virtual course about Brahman cattle.