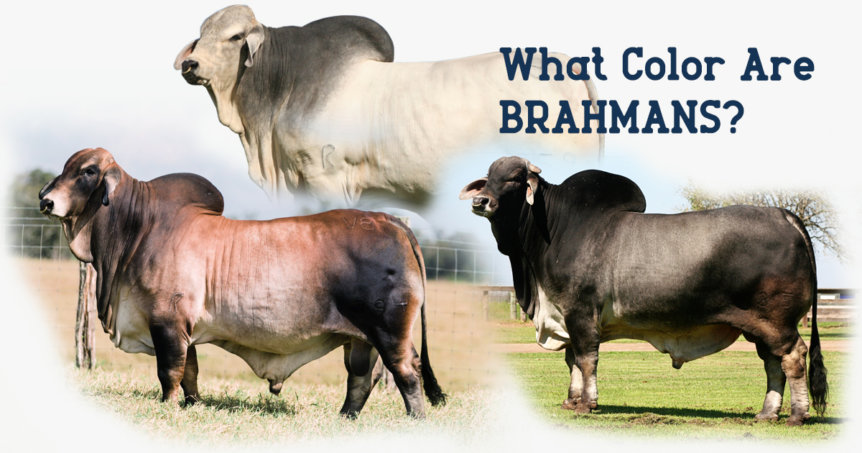 As the first breed developed in America, it’s only fitting that Brahman cattle are commonly referred to as RED, WHITE and BLUE right?

But what do these colors mean?

Brahman cattle can come in a variety of colors, and there is no guideline for the ideal color. This is more of a breeder preference.

The Standard of Excellence of the American Brahman Breeders Association describes the ideal Brahman colors as “Grey or red of varying shades of predominance.” Some shows in the United States offer a “split show” where grey cattle compete in one division and red cattle in another.

Grey cattle can range in color from solid white, light grey, dark grey, red tinged, “blue”, exhibit a snowflake pattern, and even be solid black in color. When a breeder refers to an animal as “blue” – it means a calf that was born red and turned grey as it got older, and has a darker grey color, but not black tips.

The main point to consider when evaluating color differences is that there are three areas of concern that result in immediate disqualification of registry for Brahman cattle. These should be avoided at all costs:

Brahman cattle should have black pigment in four key areas on the body:

However, you can use this black tip trick to predict if an animal will breed it’s pigment on to it’s offspring when mated red or grey.  For example, Brahmans with black tipped ears, and black pigment on their reproductive organs can be bred either red or gray — meaning they produce a grey calf when bred to a grey animal, or a red calf when bred to a red animal.
Amongst Red Brahman breeders, a deep, dark cherry red is generally considered more desirable breed character than the lighter pigmented or “pink” color.

If you like learning about Brahman cattle, we invite you to check out www.brahmanacademy.com where we offer a virtual course about Brahmans.