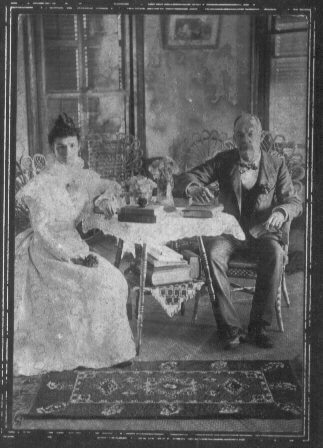 Major Andrew Northington, the 6x great grandfather of Mollie Cutrer and Ann Catherine Cutrer, and the 5x great grandfather of Rachel Cutrer, was born March 9, 1792 in North Carolina. On May 28, 1831, Andrew received his first Texas land grand, as part of Stephen F. Austin’s third colony in Texas. Major Northington was the son of parents of wealth and had been given a good education. He was a trader of land and horses, and established a stagecoach line from Houston to Egypt on July 22, 1839. It was said that Major Northington “kept an open house, had a fine voice, a quick warm imagination, and was a brilliant talker.”

Andrew, a widower, brought his two eldest children to Texas with him, Mentor and Rachel Ann. His wife, Priscilla Dawson had died before the family moved to Texas.

At the time of his death Major Northington had 14,208 acres, $5,567.00 in Due Notes, one wagon, five oxen, 10 head of stock, seventeen horses, five beds with furniture, one double barrel gun, one silver watch, one eight day clock and 500 bushels of corn. His only debt was a doctor bill of $200.00. As a pioneer of early Texas he lived a vigorous life, frequently exposed to the elements and at times suffered from an inadequate diet.

Our beloved ancestor is buried in Egypt, Texas, in the Egypt Plantation Cemetery.