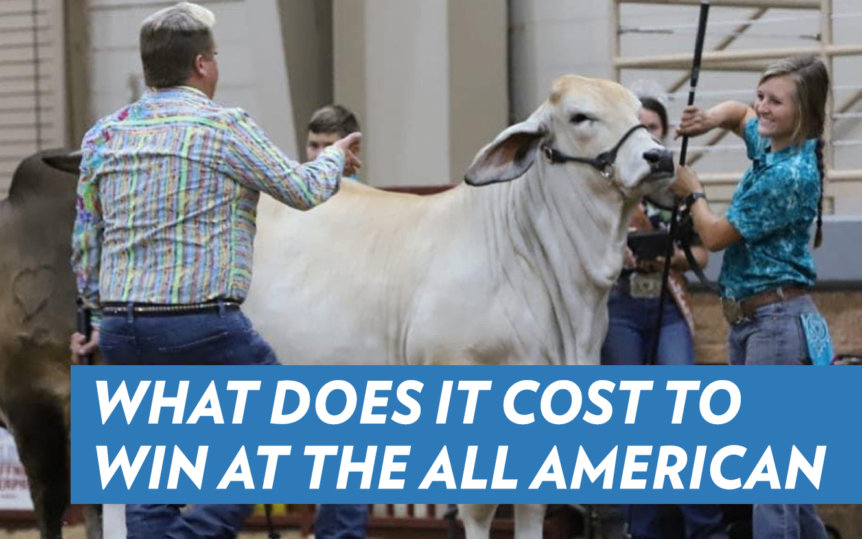 It’s always interesting when people get into discussions of what does it costs to show Brahman cattle, especially in the female show. When I got home from the recent 2022 AJBA All American, I did a little research which is very insightful as to the cost of winning in Brahman female shows.

To begin this project, I took the AJBA Grey Female Show program, and entered the show placings in all of the female classes, 1st through 10th place. Then, I googled the animal name to find public pricing on animals that had sold in online sales. Then, I classified the remaining cattle into marketing groups that are general public knowledge.

Home Raised – Calves that are bred and owned or in the case of our daughter, home raised.

Loaner / Sponsor – This would be the case where the junior may not have purchased the calf, but is showing it under a sponsor / adult breeder, etc. These were classified into this category only if I knew 100% confirmation that this was the case.

It’s no secret that the Grand Champion Grey Female sold in the SRS Online Sale for $14,100. To me, this is great because it shows that there is a wide selection of high quality Brahman cattle out there that are available to the entire Brahman public. Any individual in this entire breed had a chance to purchase her, and I love that.

Moving to the 3rd Places…

If you said to most people, hey, you’re going to be in the top three at junior nationals, they’d be happy. The competition here is really stiff, and most classes are 15 to 20 head. So, this is an accomplishment to be proud of. When you analyze the data between the top 3 head in each female class, here are some findings: