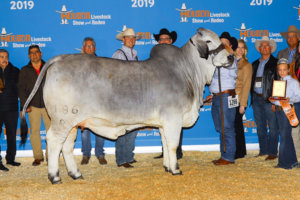 Miss V8 486/8, better known as “Sweetie”, was named 2019 International Champion Grey Brahman Female at the Houston Livestock Show. Judge Blake Nelson of Missouri selected her as the top of over 400 female entries. She was previously named Senior Champion Female.
Sweetie received her name from Mollie Cutrer, daughter of Brandon and Rachel Cutrer, because of her sweet disposition.
In his comments, Judge Nelson said “There is a female that stands out in this line up, representing what the ideal Brahman female should look like….”
Sweetie has earned the love of many Brahman breeders worldwide for her exceptional Brahman breed character, performance, function, and structural soundness. She stands in the show ring as a majestic beauty but is so powerful, so thick, and moves perfectly.
Earlier in the show season, Sweetie was also named 2018 National Champion Grey Brahman Female by breeder judge Judd Cullers. She was also shown at the San Antonio Livestock Show, where she again was named Grand Champion Female by breeder judge Pasquale Swaner of Swaner Brahmans.
We are proud of Sweetie’s ability to consistently rise to the top as champion in the three shows she competed in this year. Three shows – three grand championships. We look forward to her impact on our program.