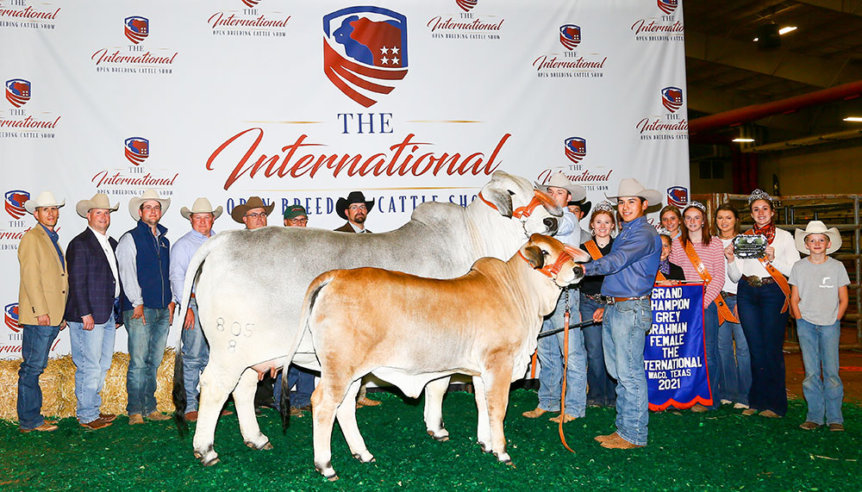 BRC 805/8 was named Grand Champion Female. She was also the senior champion female. The International Show marked the end of 805’s show illustrious show career, including being undefeated in her class during her three year show tenure, and previous championships at the South Texas State Fair under judge Reggie Rodriguez, and Dixie National under judge Jennifer Parker.

BRC Salt 117/9 was selected as the Reserve Grand Champion Female, and also previously named the Junior Champion Female. She too is an undefeated class winner on the show circuit.

We are firm believers in God’s hand in all of our lives. The dams of both of these championship females came from our purchase of the Southern Cattle Company herd. We wish to thank John Downs for his confidence in us several years ago when he offered first chance to buy his herd, and we took it.

We are also very excited about the young cattle on our show string. BRC Come On Eileen 75 and BRC Dottie 70 placed 1st and 2nd place in a class of over thirty head. Eileen went on to be named Reserve Calf Champion.

The two BRC females were selected from a field of over 400 entries in the female show.

In the bull show, we exhibited one class winner, BRC Walker Texas Ranger 77. BRC Boombox 38 was 2nd in class, BRC Dutton 376/8 was also 2nd in class, and BRC Jumanji and BRC Whoa Macklin placed 3rd. We were very pleased with our bulls as it was a competitive show and there are many nice bulls in competition currently.

This show marks one of the last show competitions for BRC over the next year, due to judging assignments. We will not be competing at the 2021 National Brahman Show, as Rachel’s father is the judge of that show and that poses ethical / conflict of interest concerns. Brandon Cutrer is slated to be the judge of the 2022 International Brahman Show, and so of course we will not be competing there either.

BRC is expected to re-emerge into the Brahman show ring at the 2022 National Brahman Show. We wish best of luck to all of our Brahman friends over the next year show season.