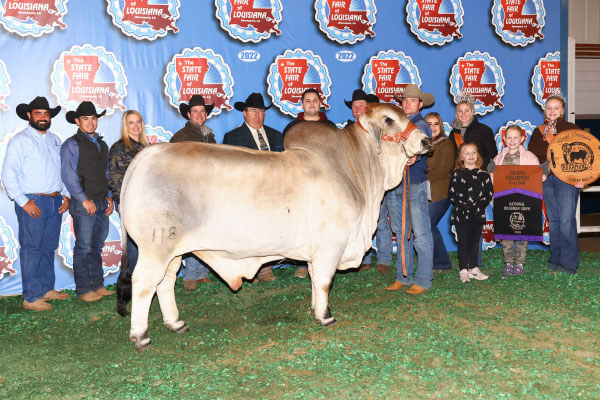 BRC Hey Dude 118 was named 2022 National Champion Brahman Bull at the 62nd National Brahman Show held in Shreveport, Louisiana. He is sired by BRC 160/8 and out of a female that we acquired when we made our investment in the Southern Cattle Company purchase.

Mitch Thomas, a Charolais breeder and well-respected cattleman from Raymondville, Texas judged. He commended Hey Dude for his moderate frame size, structural correctness, outstanding muscling, and look and style. Hey Dude was bred by BR Cutrer and is owned by BRC and Storey Brahman Ranch. This bull was Lot 1 in the BRC Genetic Investment Sale in December 2021.

BR Cutrer, Inc. had an outstanding showing, with numerous class and division winners sired by BRC bulls or carrying the BRC brand.

The Grand Champion Female – Lady H Lisa Manso – was exhibited by Heritage Cattle Company and is sired by BRC Dutton.

BRC Me Again Margaret 235 continued to be undefeated in class and division of the fall show circuit, being named Calf Champion Female. She is a Noble daughter out of BRC 103/8 and is owned by Mollie Cutrer.

BRC Come on Eileen 75 was named Reserve Senior Champion Female. This cow/calf pair has been a consistent winner throughout her show career. She is sired by JDH Gibson Manso and out of BRC Miss V8 341/7.

BRC Lady Glitter Sparkle 115 was also a class winner in the very competitive junior division, getting beat in the champion drive by Lady H Lisa, the Dutton daughter. Our daughter, Mollie Cutrer, did an outstanding job in showing LGS.

BRC Boombox 38 was also a class winner in a very competitive oldest bull class of the day. He was named Reserve Senior Champion Bull.

Harley Wade serves as manager of the BRC Show Cattle Division, and we applaud and acknowledge his outstanding care, management, and showmanship on the many BRC champions.